Last Saturday I bought myself a Cath Kidston umbrella like this 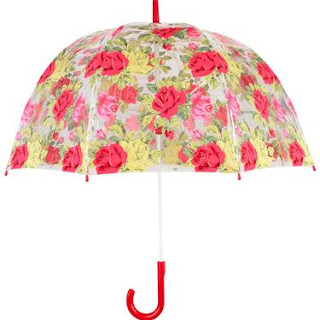 It is a thing of beauty and, as its Fulton, it's pretty good quality, too. None of this blowing inside out malarkey and, even better, I can pull it down right over my shoulders and peer out between the flowers.

In short, I LOVE this umbrella.

As you can imagine, in the recent weather it's come in very handy, too. Every day I've been proudly walking through the streets of London under the safe embrace of my flowery shelter, and every day I've thought, 'I'm so glad I own this umbrella. So so glad.'

So as you can see, I really really love this umbrella.

Then yesterday, just before leaving work to go and vote, I proudly showed it to my boss. And then, I jumped on my first bus that takes me home.

On this bus, I proudly hooked my umbrella on the rail in front of my seat. 'Must not forget my umbrella,' I said to myself.

On changing buses I went upstairs and sat on the top deck. But something was missing, and if it wasn't my umbrella then I'd be a pretty crap story teller wouldn't I?

The bus with my umbrella hurtled by. I hurtled down the stairs of my bus and boldly asked the driver to 'FOLLOW THAT BUS!' She was more than happy to oblige as her route took her the same way, for about one more mile.

But then, disaster struck. A STUPID tourist got on my bus. He sat his entire family down and then got off again to buy tickets from the machine.

I watched my umbrella slowly slip away out of running reach. I tried to resist the urge to scream at the tourist. I tried not to cry.

The bus driver then stepped on it and we hurtled up Regents Street in hot pursuit. By Oxford Circus, after a collection of sinister red lights, I'd given up hope. But then, on turning into Oxford Street I decided the only thing to do was run, run after that damn bus.

So that is what I did. I threw my handbag over my shoulder, apologised to my heel-encased feet and legged it as fast as I could, dodging the BLOODY tourists who were intent on wandering at a snail's pace in the middle of the pavement.

By Bond Street I could see the bus in the distance. I pressed on.

By Selfridges, I could see it at a bus stop. It was so close my heart was almost breaking. My lungs felt like they were going to explode, my big toes were dislocating, but still I pressed on.

And then? A miracle happened. A red light held the bus with my umbrella on it just after the bus stop. I ran level with it and it started to move. I mouthed frantically as I spied my umbrella… the people on the bus were staring.

Finally, I got level with the bus doors and banged on them. The bus driver ignored me until I did the most impressive sign language of 'I'VE FORGOTTEN MY UMBRELLA' and with a smile he let me on.

I could have kissed him!

Staggering onto the bus, barely able to breathe, I grabbed my wayward umbrella and a little cheer went up as the passengers realised what had happened. I then stepped straight off that bus, gasping for air, into a crowd of commuters who were waiting for my original bus. When they heard my story they congratulated me and patted me on the back, laughing.

I tried to laugh but it came out as a rather strangulated wheeze.

But I didn't care, I had my umbrella back.

As I slid into my bus seat, I reflected on both my journey and that of my umbrella and drew the following conclusions:

I can run in heels

When motivated by my love of Cath Kidston, I can run fast.

Not all bus drivers are bastards.

The congestion in central London – the one that holds up buses – is not so bad after all.

And what a fitting tale for a very thankful Friday.

Have a good one peeps.

I laughed out loud! Thank you. Have a great week. X

Oh to have been in Oxford Street that night!

There is a short-film in this somewhere....surely?

Good for you for keeping it up the whole way down Oxford Street!