One of the highlights of this week – apart from a very lovely dinner with Fab Friend last night – was seeing José Gonzalez play live at the Royal Festival Hall with The Goteborg String Theory. 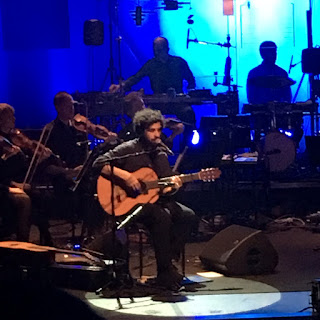 I've loved José Gonzalez since I first saw him perform live in the mid 2000s – there's something about the richness of his voice, the lightness of his touch on the guitar. In the years since, I've seen him perform twice more. It's spellbinding. And this concert was just that, once again.

One of the things I feel incredibly lucky about regarding my deafness, is that, while I've lost most clarity of speech and indeed, all of my higher frequencies, I seem to be able to really enjoy and hear music. Yes, I only have hearing to an octave and half above middle C, but that still gives me an amazingly rich experience. And what's more, I also seem to have some sort of musical memory – just like when I am lipreading and my brain fills in the word gaps, when I listen to music, my brain fills in the music gaps.

I first noticed this when I was practising for my Grade 8 flute – the two years before had seen my hearing spectacularly nosedive and I was struggling with the pace and emotion in my exam pieces. So I learnt them on the piano – two octaves lower, imprinting the tune and the story behind the music on my mind. This meant that when I played them on my flute and the music missed my ears, I still had it in my head. 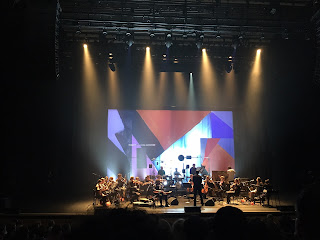 Rather helpfully, this concert was brilliantly visual. It started with carrier bags being scrunched and crinkled. I couldn't hear this but I could see it, and my brain filled in the sound effects. The large group of musicians were all clearly visible to me, and I sought each one of them out and worked out what I could and couldn't make out in the amazing music.

The brass and bass guitar rang clear, the cellos too. And then there was José's guitar playing. When he plays it's like there are multiple people producing the amazing music that my ears can make out. I watched his fingers and while the overriding 'melody' I had was the bass line, I was also able to imagine what was going on out of my frequency. And it was awesome.

Music more than anything else, is incredibly evocative for me. I think it's because whenever I hear something amazing, I am reminded that I must never take that sound for granted. Never take what I am hearing for granted or the fact that, even though I am deaf, it still sounds amazing. I am lucky.

There were moments during this concert where I felt myself welling up. When José played some of his older stuff – it took me right back to the first time I heard it.

I feel so lucky to have my audio memory – it's like my ears grab on to what they can and my brain stores it away just in case I never get to hear that sound again.

It's so much more than just music for me. José Gonzalez is proof to me that my hearing, while not perfect, is still bloody brilliant. And while I can't hear the radio, or conversations in the office, or the TV without subtitles, or what people are saying in the car or in the dark, I can hear music. Or at least my version of it. And because I don't know what I am missing sound wise, to me it sounds perfect. Or in the case of Mozart chamber music or handbell ringing... completely and utterly silent.