There's no getting away from the fact that I am a massive tennis fan... FJM really helped me fall in love with tennis because he explained what the commentators were saying and so instead of just watching the tennis on TV with no real idea what was going on, he gave me an insight into the actual game.

It was amazing. I went from having no interest in tennis, because I had no clue or insight into the sport on to spending a large chunk of my salary on tennis tickets for Queens, Eastbourne, Rotterdam and Wimbledon every year!

But last night my deaf and my tennis worlds collided when British women's number 3 Naomi Broady tweeted that she only just discovered that it was duct tape not duck tape.

Now, I've had my fair share of mishearings, mispronouncings, wanting-to-crawl-into-a-cave-and-hide-for-all-of-eternity moments thanks to the English language and my deafness, but I was pretty sure that Naomi should be spared feeling the same over this one – and so I tweeted her back... 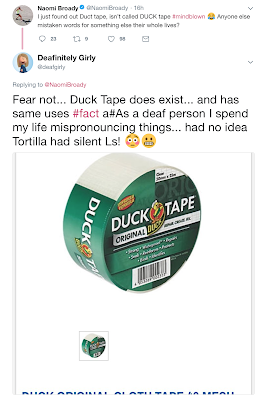 Because there is a Duck tape. And she replied... 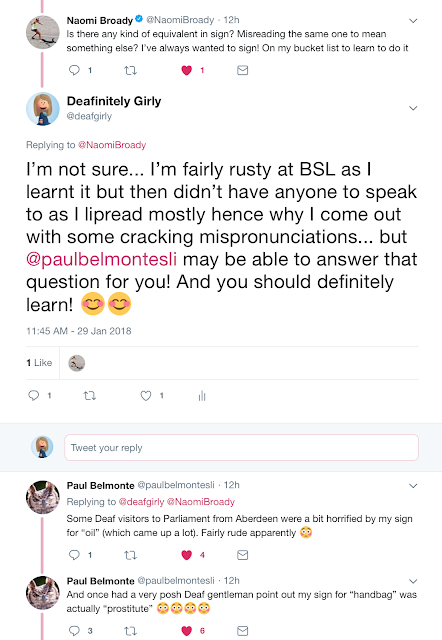 And then we got one of my favourite people Paul Belmonte, sign language interpreter extraordinare in on the conversation and hilarity ensued.

I was completely positive that was what the voice over was saying as in the advert the milk was moving... with hindsight, the word I was probably looking for was 'brown' but hey ho.

But my entire daily life is filled with these occasions. After all, when you look at my 'word list' hearing test results, I have no clarity between consonants and very little with the vowel sounds so it's all complete contextual guess work.

I hear words in the context of the conversation and then pick the beginning, middle and end sounds that best match the lip pattern and the vowel sounds. But it's not always right... as my shocking word test results reveal.

But what I realised last night is, that I am OK with that. I am OK with the hilarity that follows when I make some massive faux pas – all examples of which have currently left my brain – and I am proud that I have a skill that not many people have.

Guessing what people are saying through lip patterns, the small amount of sound I hear and their body language gives me a unique insight into situations. Even on the TV, I find myself guessing the script before its said, and in real life, I have a really annoying habit of finishing people's sentences... with perfectly plausible endings but rarely the one they were going for.

I sat there last night pondering about my deafness and how I just want choices as a deaf person while compiling my latest wish list, campaigns list and blog list and in that list of wishes, there was no wish to be hearing...

It's not about that. I am deaf. I am girly. I finish other people's sentences and can't hear consonants. But I can lipread in mirrors, upside down (don't ask) and across crowded rooms at parties.

I have a self taught vocabulary, which means I am learning all the time things like the Ls in tortilla, Versailles and Marseille are silent or the way certain words are said.

I am learning all the time.

And what could be better than that?

Hehe. Don’t we all make some odd guesses!