Back in May, during Deaf Awareness Week, I put out the following tweet:

and then went to lunch with ma and thought very little about it, until part of the way through eating my cheese and ham crepe, my phone started going stark raving mad and the tweet took off.

At first it was mainly my followers who were commenting and showing their support of subtitles but gradually, as the evening and indeed weeks that followed wore on, people from all over the world retweeted and commented on my little tweet and shared the reasons why they used subtitles.

And the majority did not use subtitles because they were D/deaf.

Then the tweet really took off - and two months later, it's still being liked and shared... and the stats speak for themselves.

The responses will stay with me forever. Most of them positive. Some of them made me emotional. Some of them made me laugh out loud. But an awful lot just had me nodding my head and feeling like I'd found a group of people and a voice that said 'Subtitles are not a problem for me. I use them and like them and would happily see more of them.'

I also had people who said they weren't massive fans of subtitles at the cinema but would tolerate them if it meant that people like me could go more.

Basically the overwhelming sentiment from the 70,000+ people who retweeted or liked my tweet was positive. Subtitles need to be normalised.

For me, one of the most important places to start is UK cinemas. You see, at present the number of subtitled showings at UK cinemas are very small. My local cinema for example shows close to 800 movies a week and only 2 or 3 of those have subtitles and they'll be on a Tuesday or Sunday. Some cinemas show no subtitled movies.

Deafie Blogger has long been campaigning for more subtitles in UK cinemas and I've been helping out a bit. We've had some meetings with the lovely peeps at the UK Cinema Association - who have an excellent selection of biscuits I might add - and representatives from the big chains.

We put forward our case for more subtitles and they went away to see what they could do. And the result was a very small increase in subtitled movies being shown at some of the larger cinemas as a trial.

But as I tried to access these extra showings, I soon realised that I don't live in an area where I can really benefit from this and even then the increase is so small, it's hardly noticeable. And the thing is, unless these showings are well attended, we run the risk of the cinemas assuming there is no demand and reducing the showings again.

I do understand that cinemas are businesses and they have targets and wotnot, but I still feel like there has to be a better solution than a tiny increase of showings in a select amount of cinemas.

Proving there is a demand for subtitles

What there isn't - especially in the case of UK cinema - is awareness. Many hearing people do not know that subtitled movie showings are even an option available to them. And many deaf people have given up even looking at what movies are subtitled anymore as they are never at a good time and there are so few showings.

We've hit something of an impasse.

One of the other things that became overwhelmingly apparent from the responses to my tweet was that open captions are the only really viable solution. Many Americans told me that while they used closed captioned devices in the USA for the cinema, these were often unreliable, unavailable, out of sync, not working properly, distracting as in a completely different place to the screen, and just not the solution they wanted.

I am scared that this solution will be rolled out in the UK when in fact, we just need to put more subtitles on the big screen and see what happens.

These showings need to be well advertised to avoid anybody who 'hates' subtitles accidentally attending one and making a complaint.

Because what is so maddening is that deaf people complain all the time about the lack of subtitles in UK cinemas, about the fact they often don't work or they're in smaller screens so sell out on popular movies and very little changes.

Then, one hearing person complains about accidentally attending a subtitled movie when they could have attended 700 other screenings at that cinema and that's the argument against adding more screenings cemented.

If the response to my tweet is right, I truly believe many people will be more than happy with the increase in subtitled cinema.

But what can we do?

For me, it's about keeping the conversation going, which is why I spoke to The Guardian about the importance of subtitles and why I am still so thrilled when every day my phone pings with notifications that my little tweet is still out there, being interacted with in a very positive way. 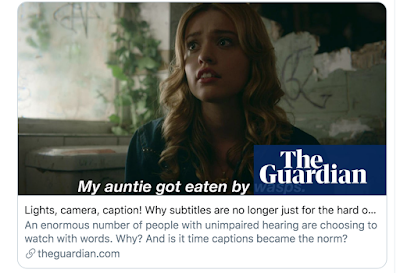 It's also about showing UK cinemas that there is a demand. Whether that's asking every hearing person you know to start asking for more subtitled showings, to start attending the subtitled showings that aren't in the middle of the afternoon on a Tuesday when most of us are at work, and to start saying, 'WE WANT SUBTITLES' and joining people like me and Deafie Blogger in trying to make our worlds that little bit more accessible.

You can sign Deafie Blogger's petition for more subtitled cinema here. You can read her latest blogs. And if you haven't already, please like and comment on my little tweet and help propel it through the Twittersphere to gather evidence that subtitles should be available more.

I can't thank those who support our quest for more subtitles - particularly at the cinema - enough. If that's you, then virtual high fives all around. And if that could be you, then thank you in advance.

And keep your eyes peeled for more. Deafie Blogger and I - and the rest of the amazing bunch of people on Twitter campaigning for more accessibility - are not giving up.