And with a resolution to learn how to type one-handed while standing up on the tube, so that this blog doesn’t get neglected as much as it has been recently.

You see, on the bus, it was easy for me to write my daily thoughts, but on a busy tube train, it’s not such a piece of cake.

And speaking of cake…

…the one I made for First Ever Friend’s wedding was a complete success – give or take a few icing sugar disasters along the way. 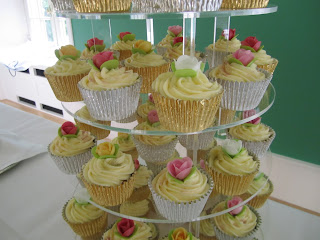 The whole week I spent in Switzerland was amazing actually. First there was our trip to the Alps to a town called Grindelwald, where we walked, chatted, admired the 360-degree amazing view and chilled out in an outdoor salt-water Jacuzzi.

What I loved most about being in the shadow of the Eiger, it’s snowy peak some 4,000 metres up, was how wonderfully quiet it was. On the first walk we went on, all I could hear was the rattle of the trains in the distance and the chattering of the millions of Japanese tourists.

The second day saw us take a wonderfully wild flower-strewn walk on the hill opposite the Eiger. Knee-high grass hugged the path, dotted with vibrantly coloured blooms of all different varieties, which in turn were serviced by a mass of bugs. 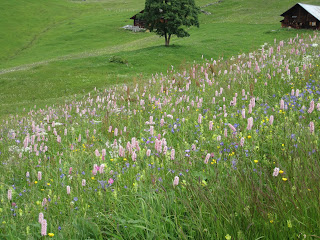 And it’s these bugs that First Ever Friend could hear throughout the walk. The drone of the flying ones, the click of the crickets and erm… the clanging of the cows wearing bells – OK not strictly bugs, but I couldn’t hear that either.

It was just SO quiet! I loved it.

What I did hear however was a low, large rumble, which we soon realised was caused by some ice breaking off from the Lower Grindelwald glacier. It was such an amazing sound and quite a captivating sight to see the torrent of crumbling ice making its way down the mountain.

There is something quite amazing about Grindelwald – about its location between some of the highest peaks, about its crazy attraction to Japanese tourists, about the fact that the Eiger is right there.

Of the 300-odd photos I took last week, one third of them are of the Eiger – it’s formidable North Face, it’s backside with the fast-retreating glacier, and it’s gentle snowy slope linking it to its neighbour. I loved it completely. 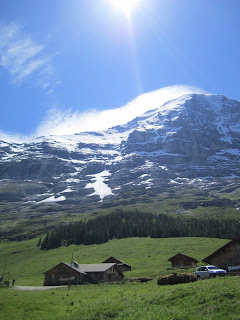 So it was with sadness that we boarded the train taking us back to the city.

But there was little time to be sad, because there was the official wedding to enjoy, for which I was the witness. This involved standing to the right of First Ever Friend and, well that where I kind of stopped knowing what I was doing.

You see, the ceremony was in German and beyond ‘Ich liebe schnee’ my German is very limited – and my Swiss German is even more limited. So when the registrar said something and looked at me expectantly, it was unsurprising that she got a clueless expression back.

But legally, she couldn’t proceed with the wedding until she was sure I had a clue what was going on. Cue some frantic signaling from First Ever Friend until I realised that if I said ‘Ja’ then things would get moving again. So I said ‘Ja’.

So that was it. I said Ja, they said Ja, we all said Ja and First Ever Friend and Swiss Boy were husband and wife.

Then, all too soon, it was time for wedding number two. As witness for this one, too, my main role was making sure everything went as First Ever Friend wanted it to. From popping her in her rather fantastic dress – and yes, I did cry – to helping her sit down, walk up stairs and all of the other things that become challenging when you’re wearing a big white frock.

It was marvelous! The cake went down a storm, and so relieved was I when it was finally built that I threw my hands up in delight and catapulted white wine and water down Swiss Man from Japan.

And then the party started. The shoes came off and we started to dance… and dance… and dance. And, according to Pa, I did this with such enthusiasm, that people were taking photos of my dancing.

Walking home, up the hill to the flat, I realised how utterly brilliant the whole trip had been and how much I could take away from it. From spending a week with some of my favourite people and making a whole bunch of new friends to discovering that Swiss icing sugar is no Silver Spoon contender and that perhaps I should hem my dresses rather than buy shoes high enough to keep them off the floor.

And finally, I realised that I’ve got itchy feet. I need an adventure…

But quite what it will be yet, I’m not sure.

Such a lovely blog post, lovely memories, I could almost have been there - you have got to stop making me cry at work! :) Well done pet xx