So yesterday was a bit of a weird day – but weird in a good way.

On Monday night, when I set up the 'Save John Lewis Haberdashery please...' petition, I had no idea that it would gain nearly 5,000 signatures. 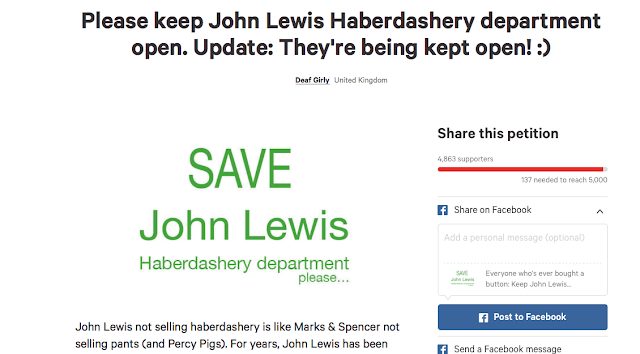 Or that I would receive an email of reassurance from John Lewis that haberdashery was safe – and more importantly not being downgraded. 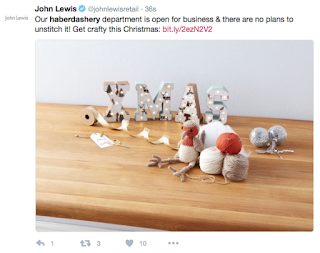 Nor did I have any inkling at how brilliant the comments would be that so many petition signers chose to leave, reminiscing about their loyalty to the buttons and bobbins floor and how important it is that John Lewis never, ever get rid of it. Especially not in favour of a bikini wax salon.

The power of the internet – particularly Twitter – never ceases to amaze me. While there are plenty of negatives surrounding social media, I feel very lucky to have such a lovely bunch of followers and follow such a lovely bunch of people. Every day someone makes me laugh, or cheers me up, or tells me something I didn't know – not just about deafness-related things but about life in general.

What's more, my little petition even made the BBC news story about John Lewis not downgrading haberdashery! 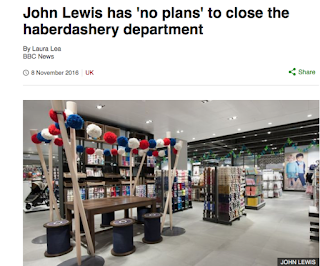 And today, when I woke up to a Twitter community in despair at the news from America, I went back to the petition and re-read the comments left yesterday and today – despite me changing the title stating that John Lewis Haberdashery is safe – and cheered myself up. Here are just a few of the amazing comments... 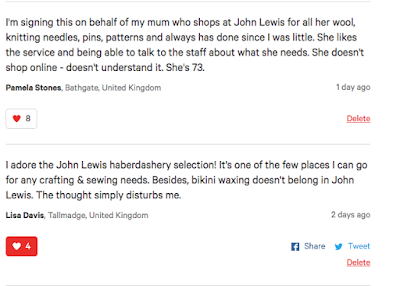 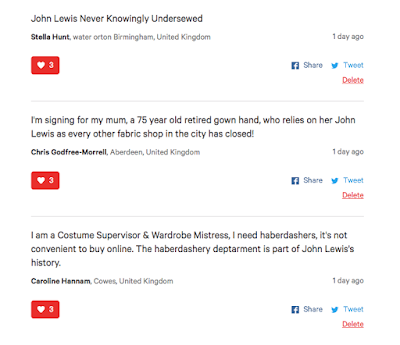 To paste them all here would take up the internet – there are literally hundreds. And many of you had a sense of humour about the bikini waxes.

I hope that I am going to meet with the peeps from John Lewis soon and chat to them about the future of haberdashery at John Lewis and get a tour of the department. I can't wait to do this. I can't wait to tell the staff about the comments on the petition – about how loved and valued they are and about how genuinely upset people were when they thought it was true.

But in the meantime, thank you lovely people for getting behind such a great cause and showing that somethings really should be around forever.

Now, I hear someone's started a petition about Toblerone... shall we all head over there and sign that?