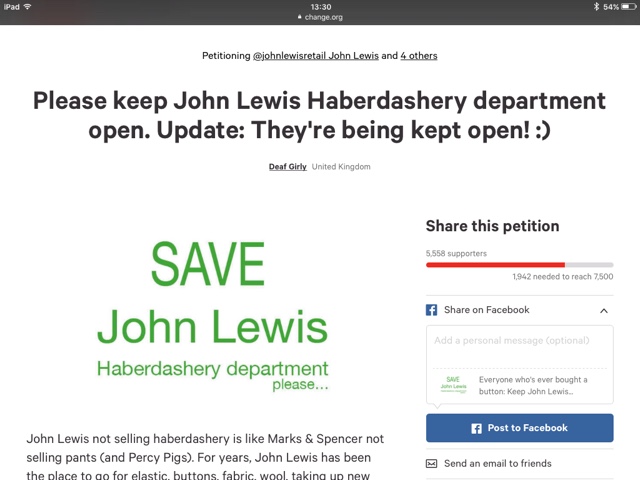 I'm sat here in a cafe in central London looking at that petition and marvelling at the 5,562 of you who signed it, many in the first day, many in the first hours before Peter Cross, Director of Communications & Brand Experience at John Lewis got in touch to reassure me that, despite the news stories and rumour, John Lewis Haberdashery was safe.

One of the things Peter also did was invite me to visit John Lewis's flagship haberdashery department on Oxford Street and talk with the haberdashery buyer Ian and Emma from his comms team. And of course I jumped at the chance to meet the person who is in charge of John Lewis's button selection – amongst other things.

Here's what I wanted to talk about:

And don't worry, everything I found out and was reassured about, I will go back and check on in 12 months.

But it really wasn't just about me. It was about the 5,000-plus people who signed the petition and many of you were still worried. So I asked you to get in touch and let me know what you wanted me to ask – my email account went mental.

What you guys wanted…

Many of you were worried about the fabric selection being scaled down and the increase in 'kits' rather than individual things you could buy separately. Trimmings came up a lot – you wanted trimmings available off the roll rather than pre-cut, and ribbons fell into that category, too.

Others asked if John Lewis could showcase and celebrate British suppliers of wool, scissors, patterns and other such things. Those outside of London also pointed out that some of the kits and wool felt very 'London priced' and what you really wanted was affordable, good quality products that you knew would do the job. You felt that starter kits and one-stop projects were taking away your shelf space.

And it wasn't just requests. I read comment after comment of people praising the knowledge of John Lewis staff in the haberdashery department and expressing a wish that these kind of people remain at the heart of this department.

In addition to the staff, you wanted classes, tutorials, workshops and places within the department where you could share and learn. You wanted haberdashery to stand proud in store, not be tucked upstairs with children's things or out the way in sports and leisure. If you had your way, make-up and beauty would be quietly moved to get haberdashery back on the ground floor. There was also many suggestions of putting it near home furnishings.

So, armed with all this, I went to visit John Lewis Haberdashery on Oxford Street. It is tucked away upstairs on the fourth floor past the kids's clothing, but it is there. And I was immediately greeted by 'The Makery Table' and two women knitting and having a chat with each other.

So what did I find out?

Firstly, and this was in answer to my direct question and two more slightly differently worded questions, John Lewis is NOT and will not being getting rid of its haberdashery department. Nor is it scaling back on the size of them.

According to Ian, 16 John Lewis Haberdashery departments now have places where people can meet and make. In the Leeds store, there is a community room which can be used for that purpose.

On the products, Ian told me the following:

As Ian and I were finishing up our chat, I got to meet Sylv – she has worked at John Lewis in the haberdashery department for 47 years. I watched her afterwards moving around the shop floor, chatting to people, picking things out and I realised that it's people like her that matter more than ever.

Ian asked me to send him your comments, which I am going to do (without names or emails attached as many of you requested this) – collated and laid out so he can browse them and see what else made more than 5,000 of you speak up.

I know I am a bit of an optimist, but really do hope that Ian, and the peeps at John Lewis, will listen and that haberdashery remains safe and even better, grows. They told me that they want to make haberdashery more relevant. And relevant is about giving you what you want. So go in to your local store and let them know what you want, and what's missing.

You know I did that in my local Sainsbury's once as I really wanted them to stock something specific. I asked in store every week whether they had it, and eventually they did. And it's still there and I still buy it.

But if Sainsbury's ever stops stocking it, I will speak up again, and that's what I think must be done with John Lewis. Keep visiting your haberdashery department, keep an eye on it, spend money in it and let's make sure that John Lewis never ever thinks about closing it, because it quite simply makes too much money and is too loved.

And as I said, I will be going back to John Lewis and checking that everything I was told would happen, is happening.

Finally though, I wanted to say big thanks to all of you who got in touch, tweeted and supported me in my petition – it worked, John Lewis noticed us and even though the closing of the haberdashery departments turned out not to be true, it did so much to reaffirm the importance of haberdashery in the 21st century.

Thank you for your enthusiasm and spending time discussing this with them. Surprisingly Paul, one of their managers in the Oxford Street haberdashery department did not met you , when I spoke to him a couple of weeks ago he was arrogant , lied to me that the embroidery firm had gone bust ( JL has since apologized to me about this lie) and said haberdashery was old fashioned and they had to move with the times .Who was speaking the truth ? we shall see...