Regular readers will know that I have a love/hate relationship with exercise classes at gyms and on DVD. I love the idea of them but find it quite hard to follow what's going on, especially in the Downward Dog position or while doing a press up on a power plate.

In classes I usually take reinforcements in the form of friends. From the Singing Swede in spinning who used to tell me which way to turn the resistance thingumajig to HannahBanana who got me through some baffling power plate classes, this method usually works, even if it means I am a few steps behind everyone else.

Recently however,  I've been working from home a lot more and rather than heading off to the gym in my lunch hour,  I've been cracking out my vintage workout DVDs. And I'm talking vintage. Think Callan Pinckney's Callanetics or Rosemary Conley's cheesy pop-filled delights, the latter is quite good fun to dance around to while chucking on a neon pink Primark sweatband for good measure, while the former causes immense pain to your inner thighs and may see you flickflacking down an entire staircase after you lose the ability to bend your legs the next day (yes, this actually happened to me once).

However, after roping in SuperCathyFragileMystic into joining me for Rosemary's promise of a 7-day slim down, I realised just how much I was missing. SCFM proceeded to recount everything that Rosemary was saying and do you know what I didn't have a clue just how much that lady can talk. From the breathing and the posture to the success stories and the countdown on sit ups, I was missing it all.

And that got me thinking – with iTunes getting better at adding more movies with captions, I wondered whether they now offered workout videos, too.

And guess what? They do.

So DG went shopping, from the comfort of her sofa, while wearing her neon pink Primark workout gear – trust me, sports kit is one thing from Primark that I without fail always love – and bought the following: 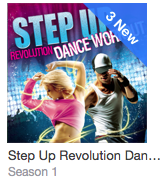 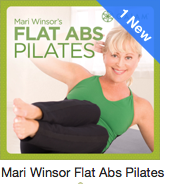 As they downloaded I was nervous that I'd just spent more than £10 on something that actually wouldn't be subtitled. That there would be a glitch in iTunes and I'd be left trying to lipread instructors in my usual fashion while bobbing around attempting to be coordinated. But guess what? They really are subtitled. Properly subtitled!!

I tried the Step Up one first, pulling my hair into a high ponytail and adjusting my sweatband for good measure. But within five minutes, I discovered something – having subtitles doesn't make me any more coordinated. I am still just as rubbish as I was before. But at least now I know that I am being rubbish like normal hearing people.

It was a sad realisation that it's not my deafness that makes me a terrible dancer. I've got no excuses now. And so, after half an hour of feeling like a total lemon, I confined the Step Up workout to the dusty shelves of my iTunes library.

But Mari Winsor was a whole other story. I LOVE this workout. The subtitles are excellent because they give you all the information about posture and breathing that is important about pilates.

They give you Mari's chitchat about stuff and let you know that the pain-inducing position you're in only has a bit longer left before you can breath a sigh of relief and have a cup of tea.

I would highly recommend it.

Do I have abs of steel yet? Well no, because this weekend I sat on the sofa, watched tennis and ate Tunnocks Caramel wafers but if Mari and her subtitled pilates classes have any say in the matter, I may well have soon.

And on that note, I think it's time for another Tunnocks Caramel Wafer. Mari, I will see you later.